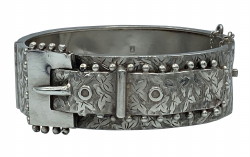 These Victorian sterling silver pieces originated in England.  Most were produced either in the Chester or Birmingham regions of England during the 1880's to the turn of the century. This period was known for the Aesthetic Movement which meant that art was produced strictly for the sake of art and not for a specific purpose. This movement began with the Japanese; therefore, many of the designs have Japanese undertones such as the swallows, bamboo, sunflowers, and butterflies. This movement was obviously connected to nature and meant to be somewhat sensual. Each design was chosen for its simplicity in stylizing it onto a piece of jewelry or other art form. Birds were represented by the swallows or cranes, insects by butterflies, plants by bamboo or sunflowers. These designs were found on the bracelets, lockets, earrings, and pins from this era.  In Victorian times, they were very much into horticulture and each flower had specific meaning.  The acorn seen on the earrings meant new life and longevity.  Ivy leaves symbolized a union for eternity such as friendship or marriage because the ivy plant grows upward and bonds to whatever it attaches.  A swallow meant I will return so often this was a piece given prior to a loved one leaving on a trip. Each piece was designed for a specific individual so there are no two pieces alike and each part of the design was deliberate.

Typically these pieces of jewelry were sterling silver with some pieces having rose gold or yellow gold highlighting part of the designs. Pieces adorned with gold are more difficult to find. Not all pieces were fashioned after the Japanese movement as some have beading or applied wire to form more elaborate, intricate work.  At times, they married two different types of metalwork.  Cut steel was a process  done in the 1800’s and early 1900’s to fashion metal into studs or points and then polish them in such a way that when the light would hit them, they would appear to be diamonds. Cut steel can be a category of collecting on its own.

The ideology in Victorian times was that more was better. Thus, ladies would be adorned with several lockets and bracelets at one time which is why the bracelets were designed with flat sides to make it easier for them to stack and chains will be found in all lengths. This line of thinking better explains the elaborate details of the lockets, earrings, and chains.  Some think of this time as being simpler, but it really was a time of lavishness.  The silver jewelry was often their traveling jewelry while they would save their jewels for galas and gatherings.

These pieces were not mass produced; thus, each piece is truly a work of art.  They were not made for export to the United States which makes their availability limited. Often one will see pictures of Queen Victoria wearing a locket or another bold piece of jewelry.  This was deliberate as she wanted to promote the industry.  She was so successful that they had to open an assay office in Birmingham.  Assay offices were where the piece was impressed with a stamp indicating type of metal, year of production, and origin of production.  This was certifying the piece by the Crown…somewhat similar to notarizing something today.  Prior to the opening of the Birmingham assay office, the jewelry makers had to send all their wares to London for testing.  Once tested, the piece would then be marked and could be sold for silver. There are books to help you identify each of these assay marks.  The majority of the pieces sold were not marked as there was not a safe means to transport the items to and from the assay offices.