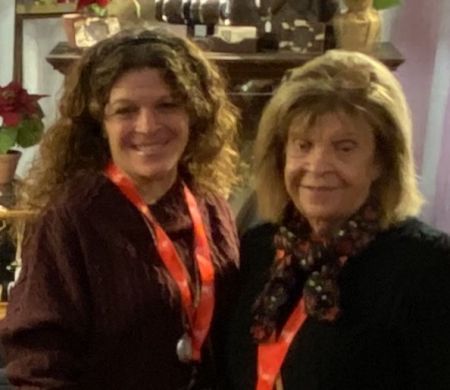 Munday Antiques is a mother and daughter team which has been in business for more than twenty-five years.  Makala is the daughter portion of this dynamic team.  With an equal passion for antiques and creative design, her love of antiques began when she was a child.  Her mom, Sandy, allowed her to choose an item from a box she had purchased at a local auction.  This item was a yellowware bowl which was a permanent fixture on Makala’s desk throughout her childhood and held anything from loose change to her jewelry.  Her love of yellowware had begun.

While growing up, Makala attended auctions and markets with her older sister and mother. Makala gravitated toward pottery and Americana while her mother had always filled the cupboards with “prissier” antiques.  Soon, collections transitioned to yellowware and ironstone.

After Makala left for college, she would return home to discover these cupboards emptied to pay for tuition or books.  Her mom had begun selling general antiques as well as their own collections at local monthly markets.

Sandy taught English and government for thirty years at a small high school.  She retired in 1994, the same year Makala graduated high school. With a desire to continue to work and pay for Makala’s college, she decided to try her hand at becoming a dealer and soon developed a relationship with a local picker and began traveling within two hours to local markets.  She would occasionally supplement the booth with pieces from their own collection.  It was after such on occasion when Makala came home and discovered the empty cupboards.

Makala felt compelled to assist her mom as much as possible throughout college as her porter and assistant salesperson.  Upon her undergraduate graduation, it meant no more lugging books to shows, but it also meant Makala was headed to Chicago to pursue a PhD in cancer research at Northwestern University.  After a few quarters on full fellowship, she became certain that she did not want to spend the rest of her life in a lab.  Years later, Makala will animatedly express that this is the only thing she has ever quit but has no regrets.

Being the supportive parents that they were, Sandy and Makala’s father, Kenny, encouraged her to pursue her original dream of becoming a physician.  She returned to Southern Illinois to do just that. While pursuing an MBA in finance, with a goal of becoming a physician with a private practice and a need for these skills, she joined her mom in the antique business on weekends. In 2001 she completed her graduate degree and was accepted at University of Illinois’ medical school.  In the interim, while working in the business, she had fallen head-over-heels in love with the notion of buying and selling to collectors as their personal shopper.  Her heart had been won over by antiques.  She informed her parents she no longer wanted to pursue a dream of science, but rather wanted to delve into the antiques industry full time.  Both parents were apprehensive but excited.

Sandy’s passion for sharing knowledge was not only apparent during her career as a teacher but can still be seen today as she educates new collectors.  Being her mother’s daughter, Makala shares the same passion and twenty years later has given many lectures on yellowware and has been published in Country Living and many special issue decorating magazines. She certainly feels privileged to have truly found what makes her heart sing.

Makala and Sandy revel in the opportunity to educate collectors about their wares.  They have based their business on clients not only leaving with a treasured item, but also with an incredible experience.  Shopping with Munday Antiques is something you won’t soon forget and can easily become an addiction.  We welcome calls, texts, and emails. Do not hesitate to contact us for a personal experience.  This is truly where we shine and what we love most.